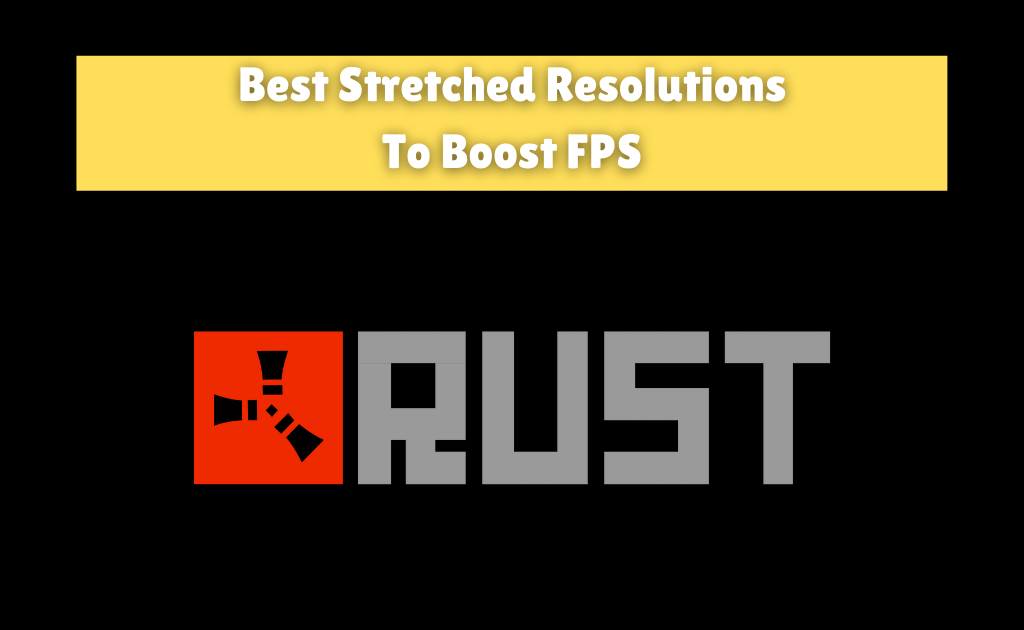 You’ve probably seen a lot of Pro Rust players and content creators with high-end PC hardware play on stretched resolutions making their game look worst, and you might be thinking, what’s the point of having the best hardware and still lowering the resolution. For some people, the advantages of using a stretched resolution on Rust are more important than graphics quality.

The most crucial benefit of playing on stretched resolutions is that you get higher FPS on Rust, and there comes the benefit of having a more responsive game and lower input lag.

What improvements can I expect in Rust by using stretched resolutions?

That’s a good question because that depends a lot on your specific hardware and the resolution you will be playing Rust on. A basic rule of thumb is that the lower your resolution is on Rust, the higher the FPS. The actual gains may vary even on identical PC builds, so that’s something to keep in mind. It doesn’t mean that because your friend with the same PC build and stretched resolution gets 300 FPS in Rust, you will be able to achieve the same.

Many things come into play, like how well your PC is optimized, the actual chips of your hardware(silicon lottery), and many other things. If you want to know more about optimizing your PC and boosting your FPS, you can schedule an appointment with me or check out my complete optimization guide for Windows.

For those of you who prefer to see actual numbers, look at the table below with a few tests I did on Rust with different stretched resolutions and how much the FPS increased on Rust depending on the resolution. The tests were done on a 1080p 24″ monitor.

The best thing, in my opinion, to do is to test every stretched resolution on Rust for a few rounds or days and see which one feels the best for you. Below you can find my recommendations on the best stretched resolutions for Rust while considering the FPS gains and visibility in-game. You don’t want to be playing in 400 fps but not be able to see any enemies because your screen is zoomed in too much.

1811×1080: Playing Rust on 1811×1080 resolution will provide you with a slight FPS boost while the change in graphics quality will be minimal to unnoticeable.

1750×1080: I feel like 1750×1080 is the best stretched resolution for Rust since it will provide you with a nice FPS boost and lower input lag while keeping the graphics quality to an acceptable level.

1600×900: The 1600×900 resolution is a pretty solid choice for many people playing Rust on stretched resolution, and without a doubt, you must try it.

1440×1080: Almost identical to the previous one, the 1440×1080 resolution is a good choice, especially for people on low-mid-end gaming PCs since it will give you a nice boost on your FPS.

How to apply stretched resolutions on Rust

If you have an AMD GPU follow the steps below to apply any stretched resolution to your PC.

Right-click on your desktop, and choose AMD Radeon Software.

Next, navigate to Gaming -> Display, and on the right side, you should see the “Custom Resolution” option. Click on “Create New“.

Once you’ve done that, open up Rust, go to graphics settings, and make sure to choose the resolution you just created as well as that you are playing the game on full screen.

If you have an NVidia GPU follow the steps below to apply any stretched resolution to your PC.

Right-click on your desktop, and choose NVidia Control Panel.

Next, navigate to Change Resolution and on the right side click on the “Customize…” option.

Now type the stretched resolution you would like to play on and click on “Test“, and then “OK“.

Now, select the resolution you just created and click the “Apply” button.

Navigate to “Adjust desktop size and position” tab, and make sure that under Scaling Mode you select Full-screen, and that the scaling is performed on Display.

Once you’ve done that, open up Rust, go to graphics settings, and make sure to choose the resolution you just created as well as that you are playing the game on full screen.