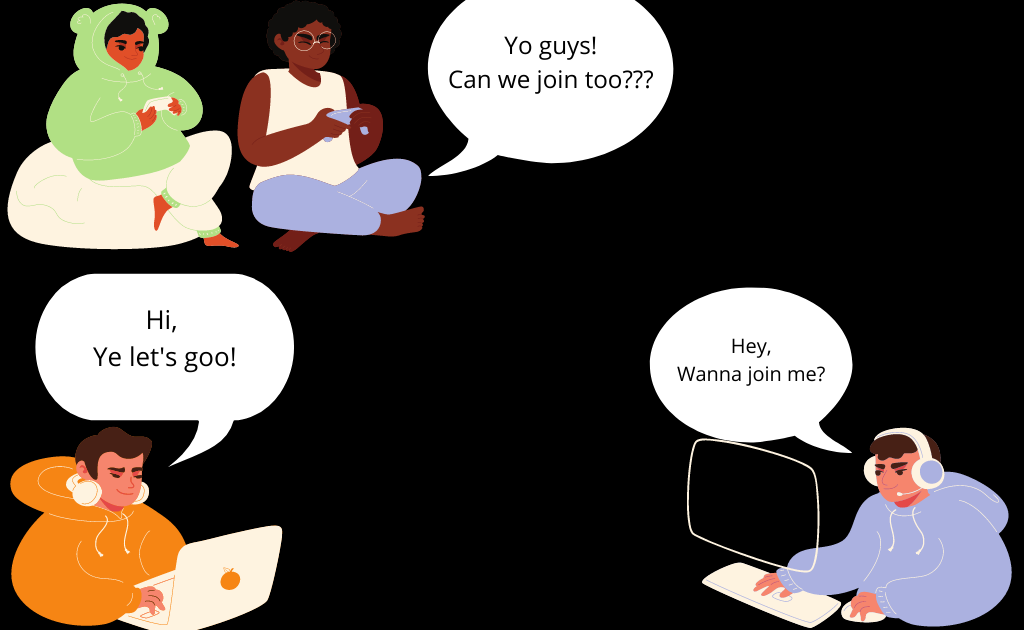 I’ve been a solo gamer for many years, and I know that sometimes, it gets tedious and frustrating playing alone, especially in some specific games. If everyone you know is busy, not even playing games, is a total noob, or for any reason, you can’t seem to find anyone to play with, then no worries, I got you covered. In this guide, you will find the best places to find people to play games with you as well as detailed instructions on how to get in touch with them and start playing your favorite game with someone as soon as possible.

I would say that this guide has two big parts to it. The first is on finding people to play games with you, and the other is on how to get in touch with them and ask them to play with you. Whether you are playing games on PC, Xbox, Playstation, Switch, Mobile/Handheld games, or even social network games below, you will find the best places to look for gamers like yourself to play together any game, on any device, at any time!

Maybe the gamer friend you are looking to play with is just in front of you, and you don’t even know it. You can start adding or contacting players you’ve previously played with and ask them if they would be interested in playing with you. The majority of them may ignore you, but don’t get discouraged. That’s how it is.

Don’t just go all in and add everyone you see in front of you; instead, depending on your criteria, check how the person plays the game and also how he behaves in the game chat, and if that’s something that you like, go ahead and send them a message and ask them to play with you.

Depending on your game, there might be clans/guilds/group chats or places where players gather and hang around. Join any of these and start being active in the discussions. If you don’t know what to say, start by asking questions about the game, and the conversation will come along.

On Reddit, you will find a community for every game that I think of right now. Apart from that, the GamerPals subreddit is all about finding other people to play games with you. You will find many people already looking for someone to play with on this subreddit, so it will be much faster and easier for you to make a match because you won’t even have to ask anyone.

Apart from that, you can create a Reddit account and start being part of the community of your favorite game by uploading content and talking with people around the subreddit. That way, people will remember you, and it will be much easier to get people to play with you.

Again, don’t go all in and start spamming the subreddit because it will get you banned. Instead, create your post with details about you, your gameplay, and the criteria the player you are looking to play with should have, and then wait. Make sure to add details like your Timezone, Rank in-game, let them know if you are a competitive or casual player, etc.

Discord servers can be an effective way of finding people to play with you. Search your favorite game name + “Discord server” on Google, and you should see a few to join instantly. Once you join the Discord servers, you can start looking for dedicated sections for people to team up, join guilds and clans, or casually play the game.

Apart from that, you can also start engaging in the “General” chat and start being a part of the Discord community. Rest assured that the most active people there will recognize you after a few days, and they will be willing to play with you.

Fiverr is an entirely different story from the rest of the options. The reason is that you’ll have to pay to play with someone, but that doesn’t mean that you have to spend a fortune. You can start playing for as low as 5$ for a few hours, and the best thing is you can start playing instantly as long as they are online and available.

I added Fiverr to the list because you will find Pro players, Coaches, Competitive players, and casual gamer girls and boys to play with you. What’s better than playing with someone and having fun? The answer is simple: Playing with someone, having fun, as well as learning from them!

If you are looking for people to grind with a specific game or looking for Pro players to help you win a tournament with prizes, or a coach to play with you while teaching you how to become a better player, or just a casual player to play with, then this is the place for you.

Imagine that you need someone to play in a tournament with 500$ in prizes. You can get a Pro player from Fiverr for like 30$, and you increase the chances of winning that tournament instead of playing with a random guy or not even taking part in the tournament because you couldn’t find someone on time.

Forums – Every game has one

Every game has at least one Forum where players interact and help each other. In the forums, you should take the same approach as Reddit. You will find tons of people looking for others to join their team or be their duo, as well as a lot of people asking questions and asking for help.

I would go around and interact with them, try to help them solve their issues, and then ask them if they would be interested in playing with me. Who doesn’t want to play with the kind guy that helped them solve the issue?

Apart from that, you can create your thread with a short description about yourself, your in-game stats/skills, and your requirements from the other person and post it. Then chill around, and you sooner or later should get a notification that somebody replied to your thread and it’s interested in playing with you.

I will talk about each social media separately because finding players to play games with on each one is somehow different.

Facebook – Start searching for private and public groups related to the game you want to find people to play with you. You can do so by using the search engine of Facebook. Another way to find active groups is by checking if your favorite pages or game influencers are part of any(you can do this by checking their profile). Once you find a few active groups, take a look at posts of the last few hours and check if there was anyone looking for people to play with you. If not, it’s your time to create a post and publish it.

Instagram – On Instagram, there are group chats that you can join that you will find a lot of players to play with, but I don’t recommend it because you will be spammed all over by bots and fake profiles.

Instead of finding someone as quickly as possible, I would search a game’s hashtag, then sort the posts by time and watch the latest posts.

Find the latest posts that someone uploaded with the game’s hashtag. Now start by leaving a nice comment related to their gameplay. Then either leave a comment asking them if they would be interested in playing with you or just hit them up on DMs.

Do this for a couple of posts, and you will have a teammate in no time.

Twitter – Same as Instagram. Search by hashtag and interact with people’s posts. Then ask them to play the game together.

TikTok – Find people you like their content, upload regularly, and start interacting with them. Leave a nice comment on their videos, send them a private message telling them that you like their gameplay and would love to play together.

Whichever websites you use to find somebody to play games with, make sure not to act like a bot and start spamming everywhere. Instead, enjoy everything you do and be yourself! Try to help people build relationships, and rest assured that they will ask you to play with them!