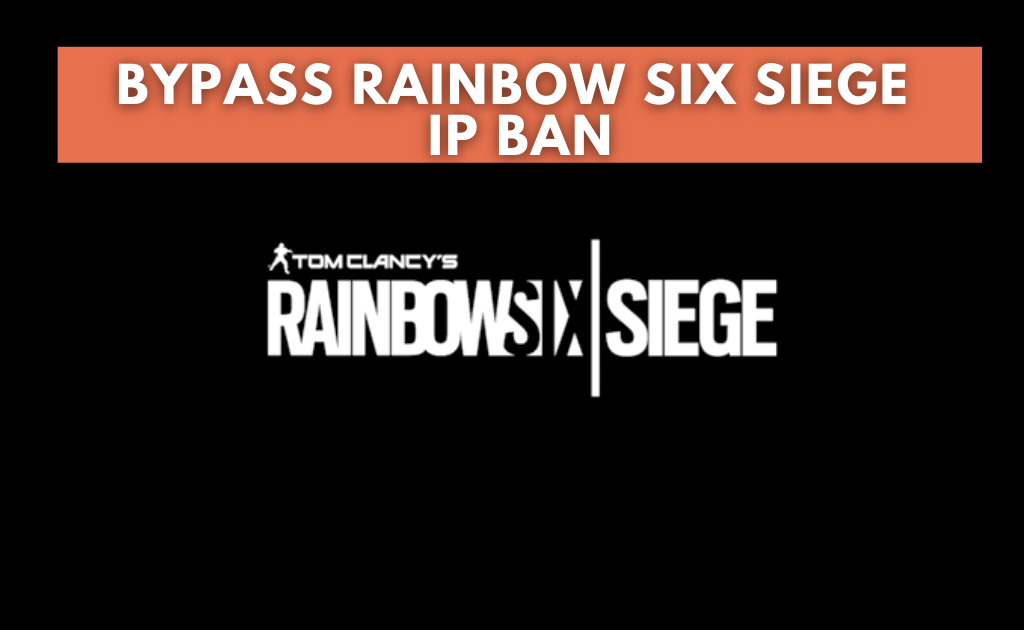 When you log in to Rainbow Six Siege, it stores your IP in its database, and your IP address acts as a unique identifier for you. It is usually used to protect your account from potential hackers but be sure that it will be used against you without hesitations if you break the rules.

While, as I said above, the Rainbow Six Siege IP ban mainly applies to cheaters in-game and people who break the rules, some rare cases exist when users get IP banned without an apparent reason.

Whatever the case, below, you will find step-by-step instructions on how to get around the Rainbow Six Siege IP ban instantly and get back to playing with the gang.

IF THIS GUIDE DOESN’T GET YOU UNBANNED, THEN YOU ARE PROBABLY HWID BANNED, AND YOU WILL HAVE TO FOLLOW MY GUIDE ON HOW TO BYPASS HWID BANS.

Below you can see some of the most common reasons people get banned on Rainbow Six Siege:

How To Bypass IP Ban on Rainbow Six Siege

Now that you know the fundamentals of an IP Ban on Rainbow Six Siege, let’s get straight to the point. Below you can find all the steps to get around an IP Ban and get your IP address whitelisted again and start playing instantly.

To get around the IP ban on Rainbow Six Siege with 100% success, you should do every step of this guide in the same order as shown below and not skip a single one. If you miss anything, you’ll most likely fail to bypass the IP ban and have to redo everything.

SLOTHYTECH DOESN’T TAKE ANY RESPONSIBILITY FOR YOUR ACTIONS.

You are not encouraged to use these methods or techniques.

The first and most important thing you’ll have to do is to uninstall Rainbow Six Siege completely. We want to ensure that no files are left on the PC that could link you back to the IP ban.

Navigate to the Control Panel and choose the option Programs.

Locate Rainbow Six Siege, right-click on it, and choose Uninstall.

Now let’s start clearing up any trace files left on your PC. Please copy each location from the list below, paste it into the search bar, and look for Folders/Files related to Rainbow Six Siege and delete them.

These are the locations you will find in the shortcuts:

Once you delete everything related to Rainbow Six Siege from all these locations, the next thing you will have to do is to delete some leftovers in the registry.

A window should pop up. You will have to do now to copy each of the locations below, paste them into the registry search bar, and then look for any folders related to Rainbow Six Siege and delete them.

At each location, you will see a lot of folders on the left side.

Right-click on any folder related to Rainbow Six Siege and choose Delete.

Make sure you clear up the files above, so you don’t get linked to the previous IP Ban.

Your IP address is the most crucial security step that will make or break everything you did above to get unbanned from Rainbow Six Siege. The best way to change your IP address is to use a VPN service or a proxy server(Proxys need an excellent setup to avoid disconnections and unhiding your IP, so let’s stick with the VPN).

I recommend using NordVPN because they have dedicated IP addresses which means that you will be the only person connecting to Rainbow Six Siege from them.

Why is the dedicated IP important?

Because you will have a fresh IP address only for yourself that no one else can connect from.

The shared servers from all VPN services are public to everyone with a subscription, which means that the chances that someone already got a public IP banned from Rainbow Six Siege are very high.

I can’t find a completely free working method to go around the ban, but this is the cheapest it can get. You can add the “Dedicated IP” option on the checkout page.

How to correctly set up the VPN to protect you from getting your actual IP address seen by Rainbow Six Siege:

The next thing that immediately gets banned by Rainbow Six Siege after the IP address on any IP Ban is the MAC address, so you have to make sure you have a different one. Below you can find step-by-step instructions on how to change your MAC address on any Windows machine.

Right-click on your primary internet adapter and click on “Properties“.

Navigate to the Advanced tab and choose Network Address.

Now go to Browserling, generate a new mac address, copy it, and paste it to the Network address box.

Click OK, and you will be disconnected for a few seconds/minutes from the internet. No worries, it will get back up.

Choose “Client for Microsoft Networks” and click “Configure“. Navigate to the Advanced tab, choose MAC Address, and paste a newly generated MAC address from the generator.

Once you’ve changed your ethernet/wifi adapter and the NordVPN’s adapter, MAC Address, proceed to the next step.

If the above method didn’t work for you

Now that you got everything ready, it’s time to create a new account or buy a cheap one from one of these websites: MMOGA, MMOGAH.

Now it’s time to go ahead and download Rainbow Six Siege and install it on your computer.

WHENEVER YOU WANT TO PLAY THE GAME, YOU WILL HAVE TO ACTIVATE THE VPN!

Yes, Rainbow Six Siege does IP Ban players frequently to keep the rest of the players protected.
If you log into Rainbow Six Siege and see a message that your account is banned or blocked, or your connection is blocked, you are most likely IP banned.

What is an IP Ban on Rainbow Six Siege?

How long do IP bans last on Rainbow Six Siege?

The duration of an IP ban on Rainbow Six Siege is usually unknown. Your ban’s appeal chance and time also depend on the follow-up actions you take and the reason you got banned in the first place.