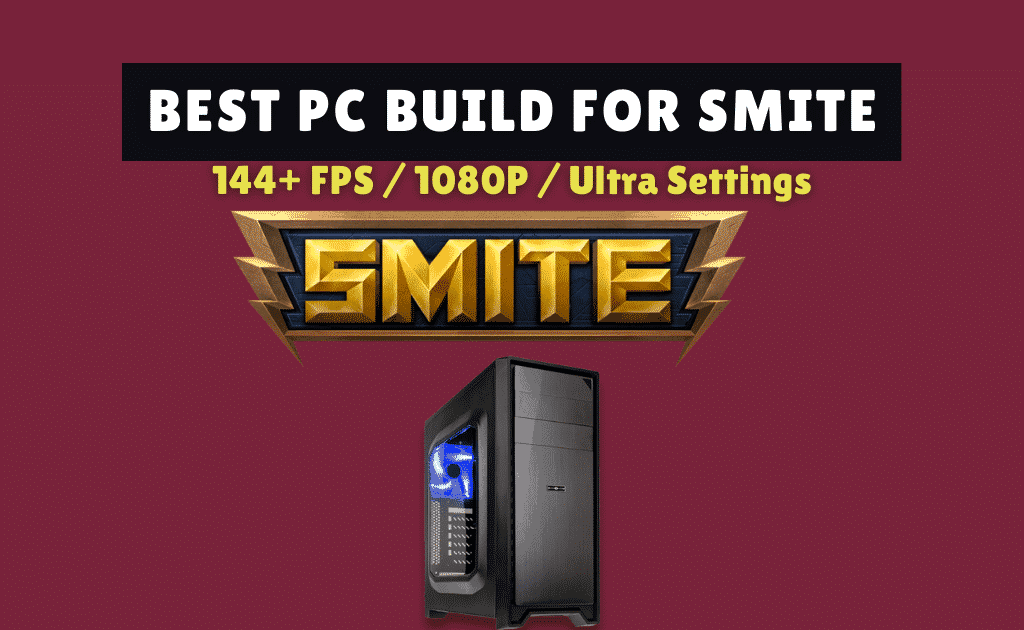 Building a basic pc build to play Smite it’s an easy task, but what if you want to create the absolute best pc build for Smite to play on 144fps / 1080p at all times? That’s exactly what I’ve done in this post. I’ve created the best pc build to run Smite on the highest settings, and what I mean by the best is that it will run Smite on 144 frames per second at any given time but always keeping the budget as low as possible.

Without further ado, here is my recommendation for the best pc build to play Smite in 2021.

A quick overview of the best pc build for Smite.

Ryzen 5 1600X is an impressive processor with six cores and twelve threads with a base clock speed of 3.6GHz that can hit up to 4.0GHz right from the box, and if you want to push a little further ( 4.1GHz ), you can do that with Ryzen Master Software. This ensures top-notch performance and high frames per second while playing Smite. Overall is an affordable and powerful CPU and fits perfectly for our Smite pc build.

For the GPU, we were between Nvidia’s GTX 1650 and AMD’s RX 570, the performance of these two is very close, but we decided to go with the GTX 1650 since it’s a newer model and probably will get support for few more years.

GTX 1650 will be more than enough to handle Smite at the highest settings possible at all times and will also let you play any game, but you will have to turn down few settings.

Overall a great motherboard and will perform perfectly with the Ryzen 5 1600X. It’s out of the box, ready for 3rd generation Ryzen and supports DDR4 Memory, up to 3866+(OC) MHz, which is really important for our build. MSI B450M Pro – VDH Max also supports NVMe based SSDs to maximize our system’s performance and speed.

Here you can find a complete list of the features.

An SSD is mandatory in a modern pc build. Silicon Power P34A60 is a budget SSD but comes with very high speeds. If you need extra storage, you can get a cheap HDD on the side to save files like photos, music, videos, etc. By installing your operating and system and Smite on SP P34A80, you will cut downloading times and make your overall pc faster. One of the things I really like about Silicon Power is that it comes with 5 years warranty, so if you don’t write/delete more than 20-30GB’s on your computer every day ( which most users don’t ), then you are guaranteed to never be out of endurance.

While 8GB is more than enough for Smite, I highly recommend getting 16GB( 2x 8GB sticks) since 1 stick will limit your performance(because of the impact of single-channel memory). Also, RAM is too cheap not to buy 16GB of ram and enjoy your new pc build, never running out of memory.

3200MHz speed on RAM will ensure the best performance combined with Ryzen 1600X we’ve chosen above and the MSI B450M Pro Max motherboard.

The Corsair CMX 550W is an 80+ Bronze power supply that is more than enough for this specific Smite pc build and even used in case you decide to upgrade your GPU or CPU in the future. Nothing special here, but the quality is solid.

A beautiful case with a lot of space for good cable management makes it easy to build your computer if you have no previous experience building a new computer from scratch. Kolink Stronghold also has tempered glass on one side. Overall you can’t go wrong with this case of this budget.

One of the first things I would consider upgrading or add would be some storage. Depending on your needs, it could be HDD or SSD, but you will most likely need to add some storage sooner or later.

If you start playing more demanding games and looking for an upgrade, I would recommend upgrading your GPU first since the CPU is strong enough to handle most of the games.

How will this build run Smite?

With this pc build, you can expect stable 144fps at any given time while playing Smite on Ultra graphics settings. 1440p/60fps is also possible.

How will this build run other games?

Here is a list of some fps benchmarks with this build on some of the most popular pc games in 1080p resolution :

*Note that by Average FPS, I don’t mean the maximum FPS. It means the average frames per second during the whole benchmark time.

As you can see on the benchmarks table, the results are pretty nice and prove that this pc build can be used for entry-level gaming.

Is this pc build suitable for streaming Smite?

Streaming and recording is not something you should worry about. The combination of this build’s components allows you to record and stream Smite without any issues.

You can change the PSU to this one: Corsair VS White Series VS450 450W Full Wired 80 Plus ( This PSU is exactly what you need for this build, but keep in mind that if you later decide to upgrade your GPU or CPU, you might also have to upgrade your PSU)

You can also go with less RAM. You can go with 2x4GB DDR4-3200MHz( This could save you 15-30$ more depending on the prices at the time you check ). It will not affect your performance on Smite.

You can use your old HDD/SSD instead of buying a new one, and you can upgrade later on if you wish to.

With the above pc build, you can expect 144fps+ at any given time while playing SMITE on the highest settings possible and be able to play any game available until today if you turn down some settings. Overall a good entry gaming pc build that you can later upgrade.

Once you set up your new pc build, make sure to follow my guides to increase your computer’s performance even more and optimize your network for the lower ping possible to have the optimal experience while gaming on pc.

See How I Can Improve Your Gaming Experience