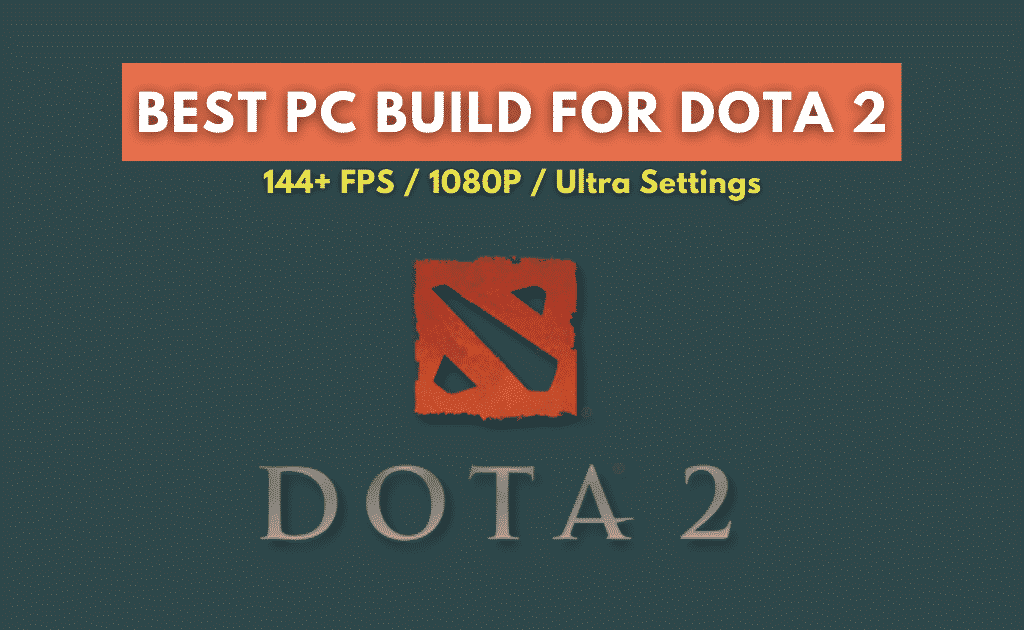 If you are looking for the best gaming pc build for Dota 2 without overspending any money, then you came to the right place. I’ve listed a gaming pc build in this guide to run Dota 2 on the highest settings while maintaining 144fps constantly for the best and smoothest experience possible!

In this build, we will be focusing on high refresh rate gaming, which is why so many console users are jumping to pc gaming to enjoy the smoothness of the gameplay.

While building this gaming pc build, my primary focus was to achieve a constant 144+fps with maxed out settings on Dota 2 without overspending any money, and I did it. That doesn’t mean you are restricted just to be playing only Dota 2. You will enjoy most of the esports titles on high settings with 144+ Fps and the latest games on 60+ fps on highest settings.

The minimum and even the recommended requirements for running Dota 2 are not anything special. Any computer released in the last few years should be able to run the game. Take a look for your self :

A quick view of the best gaming pc build for Dota 2.

Ryzen 5 2600 is the hidden beast of the budget AMD Gpu’s and makes building a relatively cheap gaming pc easy. The price of the Ryzen 5 2600 has dropped even more lately. Still, you may experience issues with availability, depending on your location.

The processor pairs perfectly with the GPU and Ram on this build and should be more than enough to handle most games at 1080p and get through medium to high demanding tasks and workloads.

It will also allow you to enjoy most of the games on 1080p on decent frame rates. The RX 580 comes with 8GB of DDR5 Memory, running on 1366MHz true clock speed and 1386MHz Boost OC speed. The card is also equipped with XFX Double Dissipation Cooling Technology for optimal cooling and performance.

AMD still continuously realizes drivers’ updates for the specific GPU and should continue for the next years, so there are no worries on the support part.

ASRock B450M PRO4 is one of the best motherboards in this price range. It supports the 1st/2nd/3rd generation of AMD CPUs ( without a bios update), meaning that if later on you decide to upgrade your CPU, let’s say, for example, to Ryzen 3600x, you can do it hassle-free. It supports RAM speeds up to 3200MHz, which is a must when pairing with Ryzen CPU’s.

It comes with not one but two M.2 slots that support both SATA3 6Gb/s and PCIe Gen3 x4 Ultra M.2.

The A-Tuning software suite will let you customize most of the bios settings easily.

Overall, it may not be the best motherboard out there, but for sure, it’s a safe and reliable choice, and hard to choose a better one at this price.

A solid-state drive is highly recommended on this build, even though it’s not a must. By installing your operating system and Dota 2 on it, you will get a huge performance boost on your system and game loading times.

250 GB will be enough for your operating system, Dota 2, the programs you mostly use, and few other games to be installed on it.

Our system should have plenty of ram at any given time to avoid slowdowns and crashes. 16 GB of ram is more than enough to play Dota 2, but considering the market prices right now, you get 2x Ram performance for few extra bucks. You may not notice a difference in your everyday tasks or browsing. Still, while playing games or multitasking, you will see a massive difference in performance.

High-speed rams are a must when there is a Ryzen CPU, and that’s precisely why we need this Dual Channel Ram on our build. This RAM kit will take care of your frame times and fps by keeping the 1% and 0.1% low fps values in check; what I mean by this is that this kit of ram will not allow games to constantly jump from high fps values to low,(e.x from 150fps to 10fps ) and that’s incredibly important when playing online games like Dota 2, where 1 second of shuttering can ruin your whole game.

The PSU will provide you more than enough wattage output and modularity, and it’s perfect if you are looking to upgrade any of your gaming pc build parts in the future since most probably you wont need to upgrade your PSU.

With this PSU, you will be able to only use the cables that you need and not crowd your pc case with the ones that you won’t be using.

A beautiful and well-designed pc case is built from quality materials. You could say it’s a high-end expensive pc case, but it only costs 50$. Even though, as I said, it’s a beautiful case, the aesthetics part is not the reason it is included in this gaming pc build. The real reason is the airflow and the pre-installed 120mm fan that will make sure temperatures will not skyrocket at any time.

There is also a lot of free space for custom cooling or water cooling and extra hardware if you decide to upgrade later on.

One of the most important things to consider while creating a custom pc build is upgradability and future-proofing. You don’t want to be in a position where you are very limited on the components that will work with your system.

I thought of that, that’s why this system is open to more storage, more extensive and better GPUs, and even better CPUs. The PSU included in this build is worth the few extra bucks you will pay now, so you don’t have to replace it if you decide you upgrade your GPU and CPU later on.

The first thing I would consider upgrading on this build would be to add some extra storage since the Crucial MX500 250 GB will fill up quickly. This Western Digital 1TB HDD will give you a lot of storage place for your favorite media files, programs, games, and files.

Since your main goal is to enjoy Dota 2, there is no need to upgrade your GPU or CPU anytime soon. If you later want to upgrade to enjoy the latest AAA titles on the highest settings, you can add a Ryzen 5 3600 and RX 5700xt.

While gaming and specifically Dota 2 was the main focus of this build, don’t forget that most of us use our computers as well for other stuff. So, you may ask, how do this build function in heavy workload and multitasking scenarios? The answer is great! The Ryzen 5 2600 will handle any heavy tasks you throw at it with no issues, and RX 580 will perform OK on video/photo editing and rendering tasks.

How will this build run Dota 2?

You can expect 144 fps at all times on the highest settings, with maybe a few fps drops in team fights with massive AOE skills. You can eliminate the fps drops in big team fights by lowering the Shadow Quality settings and the Water Quality Settings. This way, you will get constant 144 fps at any time given in Dota 2.

How will this build run other games?

Here is a list of some fps benchmarks with this build on some of the most popular pc games :

As you can see, this Dota 2 gaming pc build is more than capable of running any game on the highest settings on a decent frame rate and also run most of the games on 144fps + fps when you lower the graphic settings or move to 1440P gaming if you want to play at 60 FPS.

Is this pc build suitable for streaming Dota 2 ?

Of course, you will be able to stream Dota 2 on Twitch or your favorite streaming platform with no issues. However, you may expect a small fps drop while streaming, nothing to worry about.

You can change the PSU to this one: Thermaltake Smart 500W 80+ White Certified PSU

You could also go with other GPU models like :

A different RX 580 Model,or Rx 5500XT . Depending on your location, prices may vary greatly, so take a look and find the best deal.

You can use your old HDD instead of buying an SSD, and you can upgrade later on if you need to.

This 24″ Monitor will give you the best and smoothest experience while playing Dota 2 and your other favorite games without spending a lot of money, and I can guarantee that.

The beautiful IPS Panel will get you high-quality output with true-to-life colors. When combined with 144hz refresh rate,1ms response time, and Free-Sync technology to pair it with the GPU of this built, this monitor becomes a must.

You can easily adjust the monitor’s height or turn it left or right, which is a significant plus on a monitor. From time to time, you will change the position you are sitting in, and it should be easy to adjust the monitor to match your body position while on a computer.

All these premium features come at the cost of 185$, which is an incredible deal since most of the time, it’s hard to find an IPS Panel with a low response rate and a 144hz refresh rate under 200$.

Guides to Optimize your PC

Below you can find some posts from me that will help you optimize your PC even more and possibly increase your FPS.

There you have it, the best gaming pc build to play Dota 2. This build has everything you will ever need to play Dota 2 at the highest possible settings for years to come. This build is value for money option for everyone who wants to jump on 1080p pc gaming.

See How I Can Improve Your Gaming Experience