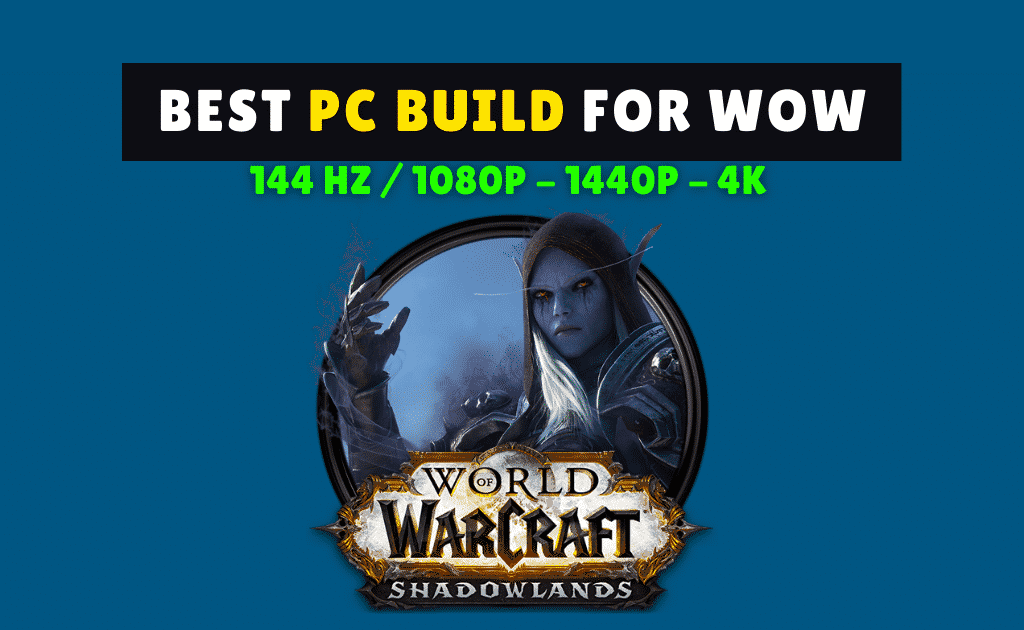 This post will focus on choosing the best computer components to create the best WoW pc build( World of Warcraft: Shadowlands ) in 2021. Despite WoW being able to run on various setups with older hardware, it can get surpassingly demanding and eat up any hardware you throw at it. WoW is not utilizing hardware to the fullest potential because the game engine is pretty old.

So building a new pc build for World of Warcraft and trying to keep the budget as low as possible was a challenge.

Make sure to read the whole post and take a look at the bottom part, where you will find some suggestions, benchmarks, and videos!

A quick overview of the best pc build for WoW.

World of Warcraft makes huge usage of the CPU as it combines probably thousands of effects, objects, and information every millisecond. That’s why in this build, we had to choose a strong CPU, and since WoW supports multi-core CPUs now, AMD’s Ryzen 5 3600 is the perfect choice for us. It’s the sweet spot of performance & value and will keep the frame rates of WoW high even in highly populated areas and Raids.

AMD drivers used to be pretty bad for this series of GPUs and made a lot of users switch GPUs or even sell. But right now things are going well, the drivers are stable and there is nothing to worry about.

MSI B450 Tomahawk Max comes with 3rd generation Ryzen support already flashed, so you don’t have to worry about compatibility issues. Great performance, even greater build quality, allows you to push overclocks even higher without worrying about your pc builds components. Great BIOS Menu as well, easy to use and prepacked with more than basic options.

Overall, a great motherboard that fits perfectly on our World of Warcraft: Shadowlands PC Build.

Right now, an SSD it’s not an option, but a necessity since blizzard made an SSD part of the minimum requirements to play the game. The SSD will cut down the loading times you enter a new dungeon, raid, or instance and increase overall performance. The Samsung 970 Evo Plus will provide you super faster reading and writing speeds at a reasonable price.

If you want to cut down the prices or make use of your old HDD/SSD, you can get the Samsung 970 Evo Plus 250GB and install your operating system and World of Warcraft and use your old HDD/SSD for the rest of your files.

In this video, you can see the difference in the loading times of WoW in different zones with the Samsung 970 Evo Plus.

Dual-channel high-speed DDR4 RAM is a must in our pc build for WoW. The HyperX Fury will be more than enough to handle World of Warcraft and allow you to stream or record at the same time without any issues. 3200MHz is exactly what we need for World of Warcraft since it won’t benefit from higher speeds than 3200MHz.

Not much to say here, a solid choice for 550W. It’s exactly what we need for this build, but if you are thinking of upgrading soon, you might consider the 650-watt version of the same PSU, so you don’t have to change it later.

A high-quality computer case with tons of functionality, cooling performance, beautiful looks, and ease of setting up your WoW pc build.

This pc build will handle without issues light productivity tasks, like streaming, rendering, and encoding.

How will this build handle World of Warcraft: Shadowlands?

This WoW PC Build will handle World of Warcraft with ease at high frame rates per second at 1080p and 1440p resolutions, and you can expect smooth gameplay on 4k resolution too. Below you can find some benchmarks in different World of Warcraft: Shadowlands Raids and Zones.

Now you get a taste of how this build can perform in WoW, I am not saying that this build is the absolute best out there, but it is the best in terms of value/performance specifically for WoW.

More benchmarks will be added.

How will this build handle other games?

Here is a list of some fps benchmarks with this build on some of the most popular pc games :

Here is also a nicely made video with benchmarks on 25 different games on 1080p and 1440p resolutions with an almost identical build to our WoW build.

Is this pc build suitable for streaming World of Warcraft: Shadowlands?

Thanks to the R5 3600, streaming and recording will not be an issue for you since its cores and speeds are more than enough for this kind of multitasking.

If your monitor is 60/75hz or you don’t mind playing on 60/75hz, then you can completely change this build. You can go with Ryzen 2600 + a lower-end GPU, keep the 3200mhz ram, and also get a PSU with lower wattage or use your old one if it’s compatible( depending on the GPU you will choose).

Another thing you could do is to cut the SSD storage in half. By this, I mean you can purchase the 250GB version of the same SSD and save a few bucks.

Using your older pc case could also be a good idea, but make sure that everything from this build will fit your case.

If, after following this guide, you still can’t optimize ESO or you feel like your PC is underperforming, you can book a PC Optimization appointment with me, and I will be more than happy to help you out and solve all your problems and dramatically improve your pc performance.

Bringing together a pc build for World of Warcraft wasn’t an easy task; it actually is much harder than building a high-end system since we aim for the best gaming experience in a specific game without overspending money. We don’t just choose top high-end products.

Testing, researching, reading, and benchmarks help us determine the best pc components match for a specific game for you to have the best possible experience.